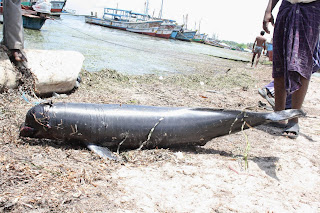 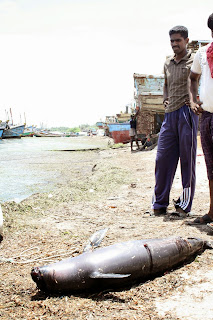 Today (17th April 2010), I received a phone call from our volunteer. He informed about the dead marine mammal in Mallipattinam coast, in northern Palk Bay. After 40 minutes of driving my bike, I reached the site in a very hot day. I took some pictures and it was my first experience to see this beautiful creature. It was 4.4 feet length and weighed about 30 kg. It was black colored with wounds on the upper side of the body. Fishers suggest that it might be entangled trawler nets. It is a very peaceful marine mammal. I have seen this, for the first time in my life, but it was dead. Finless porpoise found both east and west coast of India. Not much study is carried out about Porpoise like Dolphins.

Scientific name of Finless Porpoise is Neophocaena phocaenoide. They are more shy than dolphins, more likely to disappear when encountered, preferring not to surface around boats and humans, or jump out of the water, as dolphins do. In comparison to dolphins, porpoises are very small. Porpoises seldom exceed 7 feet in length, whereas many dolphins can exceed 10 feet in length. Porpoises are also more robust than dolphins. Dolphins have a lean sleek body, whereas porpoises often appear chubby. The dorsal fin of the dolphin is shaped in a wave. Porpoises lack a rostrum or a beak. This rostrum is very prominent in dolphins. The teeth of the porpoise are spade-shaped, whereas the teeth of the dolphin are conical or cone-shaped.

Many porpoises do not live past their mid-teens. Porpoises have an intensive reproduction schedule that may play a role in their lack of longevity. A porpoise can become pregnant each year, give birth, and then it can become pregnant again five or six weeks later, so it can be nursing and pregnant at the same time. This can also happen in dolphins, but dolphins are larger in size and it seems their body is suited for handling such occurrences, and anyhow it is less common. Dolphins can live in an upwards of fifty years.

Adult Finless Porpoises are a uniform light grey colour. Newborn calves are mostly black with grey around the dorsal ridge area, becoming fully grey after 4–6 months. Adults grow more than 1.55 m (5 ft) in length and up to 30–45 kg (65–100 lb) in weight. Males become sexually mature at around 4–6 years of age, and females at around 6–9 years of age. 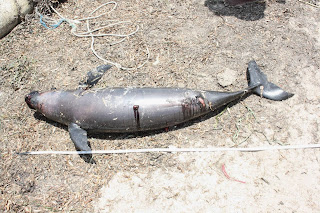